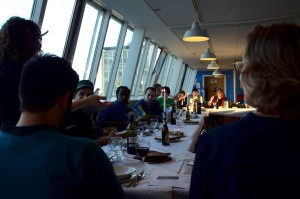 Religious holidays are celebrated all over the world. The people, places, beliefs and times change; but it would be difficult to find anyone who has grown up without having experienced tradition; the lead up to and participation in marking the occasion, whatever occasion that might be. These holidays become part of our identity, regardless of how relevant the holiday or the religion is. The tradition and ritual takes on its own meaning to us, the coming and going of these festivities mark the progression of the year just like the seasons. The holiday continues to be a part of us either because we continue to celebrate it, or because we make a conscious decision not to.

In the home I grew up in we celebrated religious holidays, like Christmas and Easter, with custom and ritual. Our traditions were built around the food we shared, the games we played, and the music we listened to; religion never really came into it. These days came around every year and unfolded like a well rehearsed play. With devotion my mother would cook a heavy Danish Christmas lunch in the heat of an Australian summer. Christmas carols would be given a little time before we switched back to Bob Dylan or Paul Kelly, our homegrown folk singing hero. As I’ve grown older, the Christian element of these days has slid almost entirely into oblivion, but I continue to recreate the smells and tastes and sounds and celebrate these holidays in this way, because that is part of who I am.

Earlier this month, I had the pleasure of broadening my holiday horizons with some new faces, new smells, new tastes and new songs – and for me at least, a new holiday. It was a Passover Seder, a Jewish custom to celebrate freedom from slavery. It was organised by an Israeli-American friend of mine. She wanted to recognise the holiday, a way to connect with that part of her identity. But she also wanted to share the experience. Instead of letting religion define the night and decide who should enjoy all the fun, this would be open. Passover for everyone.

Around thirty people came to be a part of the evening. Most of us didn’t know each other beforehand and had found out about the event through friends or on facebook. We had prepared a couple of traditional Seder dishes; matzah ball soup, gefilte fish. We sang some of the songs special to this holiday. We dipped parsley in salt water and marked our plates with drops of wine for each of the plagues the Jews were protected from, as the story goes. It’s these things that made it a Passover celebration. But there was more to this Passover Seder than these customs.

This was Passover for everyone. So what does that mean? To list us by countries, we were from Denmark, Sweden, Israel, Palestine, Syria, Afghanistan, Germany, Czech Republic, Russia, Greece, Congo, Sudan, USA. Of course some had celebrated passover before, but many of us hadn’t. I think it’s fair to say that some people there would never have believed they would one day find themselves sitting around that table, in that company, celebrating that holiday.

The people who came each brought with them a personal history. In many cases those personal histories, identities, are tangled up in bigger histories; in conflict and war, race and religion, oppression and the search for freedom. It was inevitable there would be different perspectives here. At one point, fairly early in the evening, it seemed the differences might be too big. Someone was asked where they were from and answered Palestine. The answer wasn’t good enough for the person asking the question – they don’t believe Palestine exists.

It was essentially the opposite of what we’d been hoping for the night. The evening was supposed to be about celebrating freedom. It was an attempt to take an event saturated in culture and religion and renew it by breaking down the boundaries religion and culture can create. The hope was to find the common ground we share as people, people who believe in freedom. This refusal to accept another person’s identity was not part of the plan.

Not everyone heard the conversation. Those who did responded differently. I can only speak for myself. At first I was horrified. I didn’t want the night to end in conflict. I hoped no one would feel they needed to leave. And no one did leave, no one shouted or yelled or threatened or abused. Instead of being a spark to blow the evening apart, I think this moment became the binding, the meaning for us all being there.

It was a stark reminder of a conflict that is easy to think of as unresolvable. But what followed was remarkable. People continued to talk to strangers and ask them who they were, where they came from. We finished eating. We kept drinking wine. There was dancing and laughing and serious conversation. It sparked discussion. Some people were upset but they were allowed to be. The division and difference between the people there was overwhelmed by decency and tolerance.

If a dominant mindset had forced one of those two to leave, and determined that one set of ideas was unwelcome, the entire meaning of the evening would have been destroyed. It would no longer have been Passover for everyone, but Passover for people who think like us. Instead that evening achieved what many people around the world would consider to be impossible.

To witness that happening was an extraordinary thing for me. And from the conversations I had that night I’m sure I’m not the only one who felt that way. The next morning reflecting on it all with my housemates, I was reminded of one of the songs from my personal history. That homegrown folk singer who makes up the soundtrack to my holidays tells a story in one of his songs about the struggle for identity and freedom of the Indigenous people of Australia. It’s called ‘From Little Things Big Things Grow’.

It’s hard to tell if the story of this night will make any sense to people who weren’t there themselves, just like that song that might not make sense to many people in this hemisphere. But what I experienced that night was that a small gathering of people in a university building in Copenhagen can defy what decades or centuries of conflict and bloodshed would define as possible. And I don’t think I was the only one who felt that. So if the people there can take that experience, that expanded sense of possibility, then we don’t always have to be boxed in as opposite people or opposite sides. It’s from these little things that big things grow.